WAY OF THE WARRIORS is an independent feature film that is scheduled to begin production in late 2019. It is an inspirational sports and family drama that is centered around high school hockey on the Iron Range in Northern Minnesota. This film will showcase the unique culture, people and places of the “State of Hockey” in a very authentic, positive manner. Comparable films include HOOSIERS, FRIDAY NIGHT LIGHTS and REMEMBER THE TITANS. 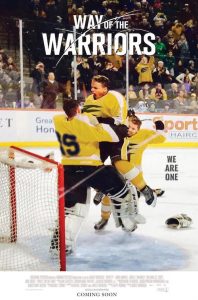 They say there’s more to life than hockey, but not in Eveleth. This small mining town in Northern Minnesota obsesses over their high school hockey team even though it’s been many years since they once dominated the State of Hockey. The fortunes of their town and hockey team have paralleled the ups and downs of the mining industry which has been steadily declining.

This season brings added significance and pressure as Head Coach Jake Murray prepares to lead a team that includes his two sons, Brooks and Tate Murray. Once the local hero, he is now the target of “Fire Jake” calls from frustrated parents and residents. And, an intense sibling rivalry is brewing between Brooks and Tate. Since an early age, Brooks has worked hard in pursuit of his dream to play college hockey at Harvard while his promising yet troubled younger brother Tate’s supreme talents have largely been wasted. The rising tensions in their home and community also challenge Jake’s marriage with his loving wife Kelly.

After the start of another disappointing season that is riddled with challenges both on and off the ice, Jake learns that more than just his team is failing. A battle with terminal cancer will make this his final season. As he struggles to accept his fate, Kelly helps him find a greater spirit of gratitude, purpose and peace. With a renewed faith and connectedness, Jake learns to fully appreciate life and embraces the “way of the warrior” as a father, husband, teacher and coach.

The entire community is shaken by the news of Jake’s dire cancer diagnosis but his new spirit and approach serves to deeply inspire his family, friends, students and players. Ultimately, Coach Murray instills in his team – and, by proxy, the town itself – a renewed sense of passion and pride. Bonded by their strong Iron Range heritage and values, the team rallies together for an improbable and magical run that culminates with a Minnesota state high school hockey championship.