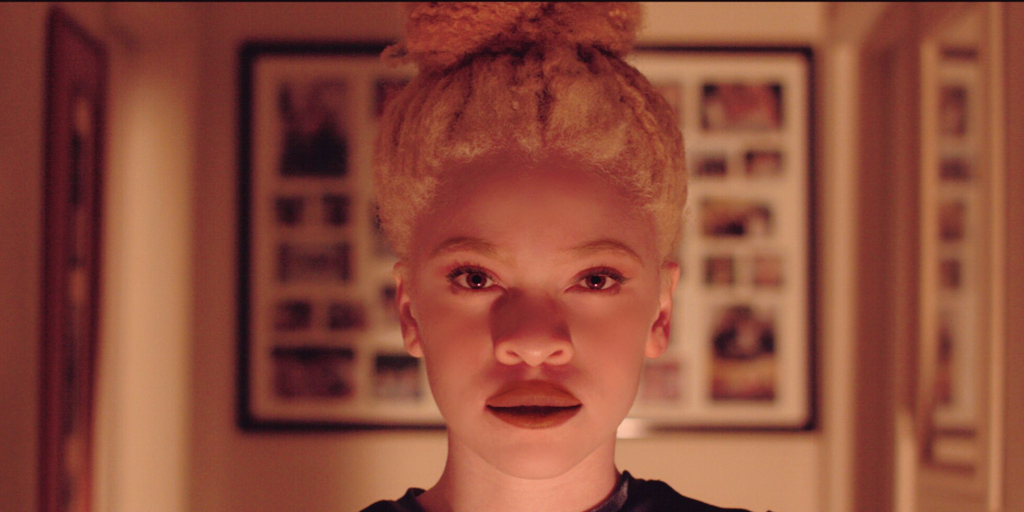 JASMINE STAR tells the story of a determined 16-year-old with albinism (lack of pigment in the hair, skin, and eyes) who makes it her mission to become a professional model in her hometown of Minneapolis, while attempting to go unnoticed in every other aspect of her average teenage life. Her philosophy: if people are going to stare at her anyway, she might as well make art from that.

Iyana LeShea is a recent college graduate from The Art Institute of Atlanta who has obtained a Bachelor’s degree in Illustration & Design. She is a model with tons of experience on the runway and in front of the camera. Not only is she extremely comfortable in front of the camera, she is also a YouTuber and a natural hair and beauty influencer who goes by the name of “Iyana LeShea”. Iyana is a passionate individual who strives to set a positive example and inspiration for many.

JORDAN WHITE  (“CHRISTIAN”)
Jordan White is an actor and model from Atlanta who began his dream of becoming a professional actor & model after graduating high school. He has since then traveled to Malibu, California to perform Chisel for Pepperdine University, and to Nashville to perform in several shows at Nashville Children’s Theater including in his hometown of Atlanta. He has also performed in the hit Black Lightning and has modeled for several independent companies.

JO ROCHELLE (DIRECTOR)
Jo Rochelle is a writer and director from Minneapolis, based in Los Angeles. She holds a BFA in Drama from NYU’s Tisch School of the Arts and is an alumnus of Teach for America (MS Delta). With Issa Rae Productions, she created and directed Black Student Union (BSU). She is also the creator/director of Dorm Therapy and Max Compact. Her short film, Sirens, premiered at the Oscar-qualifying 27th annual Pan African Film Festival in Los Angeles and was nominated for Best Narrative Short. For more information visit www.jorochelle.com.

ANUP KULKARNI (CINEMATOGRAPHER)
Anup Kulkarni is a celebrated Hollywood Cinematographer and VFX supervisor, who’s happy to be called a globetrotter. He has worked on prestigious and award-winning projects like Life of Pi, Thor 2, Percy Jackson, and many more. Anup has also been the lead judge for many prestigious film festivals in the US. Over his distinguished career, he has worked on projects in 7 languages – English, Hindi, Spanish, Korean, Lithuanian, Portuguese, and Romanian. For more information visit www.anupkulkarni.com.

EG BAILEY (PRODUCER)
E.G. Bailey is an Ivey award-winning spoken word artist, thespian, filmmaker, and producer. He is the recipient of a regional Emmy, LIN travel grant, and the Hughes, Diop, Knight Poetry Award from the Gwendolyn Brooks Writers Conference. His work is featured in the Target Art Connects commercial, now archived at the Museum of Modern Art (NYC). He was an editor for the film, Petting Zoo, which debuted at the 65th International Berlin Film Festival. Bailey has directed plays for well-known production houses, such as: The Guthrie, Pillsbury House, and Children’s Theatres. Titles include: Othello, Amiri Baraka’s Wise Why’s, Juno and the Paycock, The Brother Size, and Sha Cage’s N-Word and U/G/L/Y. He is the co-founder of Tru Ruts Endeavors and the MN Spoken Word Association. Bailey’s written works have been published in Solid Ground, the millennial issue of Drumvoices Revue, Warpland, a publication by the Gwendolyn Brooks Center, and Blues Vision: African American Writing from Minnesota, an anthology.  Bailey’s latest work includes the co-curation of America Now!, a special film project which has taken place at the Tampere Film Festival in Finland, Latvia and others; and his film, New Neighbors, was selected for the 2017 Sundance film festival. He is also a recipient of the 2018 McKnight Artist Media Arts Fellowship, and a semifinalist for a national screenwriting competition, judged by an Oscar-winning director that will be announced in May 2019.

SHA CAGE  (PRODUCER)
Sha Cage is a performer, writer and creator of new work. Her performance and work has taken her across the U.S, to South Africa, England, France, the Netherlands, Croatia, Mali, and Canada. She is a co-founder of Mama Mosaic Theater (for Women), a recipient of a Regional Emmy, an Ivey Award, a McKnight Fellowship, and a distinguished Fox/TCG Fellowship. She has been named one of the leading artists of her generation by Insight, a Changemaker by Women’s Press, and best solo performer by City Pages for her role as the pilot in Frank Theater’s Grounded (2015 Ivey). Star Tribune called her a 2014 Mover and Maker and Mpls St. Paul magazine named her and artistic partner E.G. Bailey 2015 Power Couple of the Year. Her solo show titled U/G/L/Y was presented by the Guthrie in September and tours in the U.S. and UK through 2016. Shá is an advocate for sex trafficking victims and the proud mother of two. Noted theater roles include: Prince Hal in Ten Thousand Thing’s Henry IV, Mamie in Penumbra’s Ballad of Emmett Till, Francine/Lena in the Guthrie’s Clybourne Park, Lizzy in Park Square’s Mary T & Lizzy K, Agnes in Mixed Blood’s Agnes Under the Big Top and Josephine in Ruined, Venus in Frank Theater’s Venus and Hester in F^cking A. She most recently played the Liar in Park Square’s Liar in September/October and the King of France in the Guthrie’s King Lear. She also directed an acclaimed run of the popular play School Girls for the Jungle Theatre, and her play Hidden Heroes: The Black Women of NASA has its world premiere at Stages Theatre Company.

JENNIFER RENÉE (MAKEUP ARTIST)
Jennifer Renée began her career in makeup artistry in 2005 and became the first beauty influencer with albinism. Born in Indianapolis, Jennifer began studying visual arts, performing arts and music at the age of 5. She is also a tv/film actress, singer/songwriter and a national award winning visual artist. Jennifer is an advocate for Albinism Awareness and inclusion of people with disabilities. She is currently based in NYC.