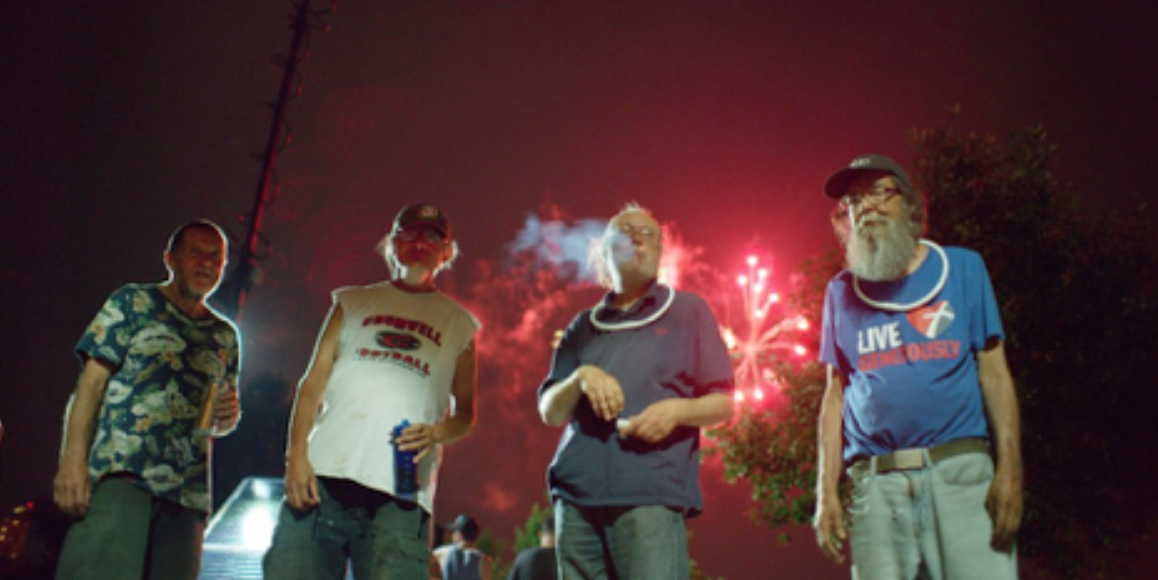 A wet house is a residential facility that provides safe lodging and care for aging alcoholics. They are allowed to drink there. The justification for this policy—and the reason the wet house receives city funding—is that it functions as a harm reduction facility. It keeps chronic alcohol abusers off the street and out of hospitals, thus saving money for the city. In order to be granted residence at the wet house, applicants must have gone through many rehabs and relapsed multiple times. Analogous to hospice care, wet houses operate on the principle that certain forms of addiction may not be curable.

Darkness Shining follows the changing fortunes of several residents over the course of the year. The film is a direct and non-judgmental presentation of their lives and the place in which they live. It is constructed through a series of verité scenes, edited to create the sense of life in the wet house.

Our title comes from James Joyce’s Ulysses: “Darkness Shining in brightness which brightness could not comprehend.” Darkness Shining is neither an admonishment of alcoholism or alcohol nor does it proselytize for the harm reduction model: rather, it is an unbiased exploration of a complicated population that testifies to the possibility for compassionate community in the midst of harrowing reality.

Born into a family of Filmmakers, Daniel B. Levin’s experience spans documentary, television, narrative film and commercial spots. Levin was the Co-Creator and Executive Producer on CMT’s 2015 series Gainesville and was the Cinematographer on the 2014 CNN series Chicagoland. Levin was the Director of Photography and Producer for The Legend of Swee’ Pea, which premiered at DOC NYC 2015. He was also a Director of Photography for the Peabody Award-Winning and Emmy-Nominated Docu-series, Brick City (Sundance Channel, 2010). Levin has shot multiple HBO Documentaries including Prayer for a Perfect Season (2011), Love Child (2014) and Class Divide, which was awarded the Grand Jury Prize at DOC NYC 2015 and premiered on HBO in 2016. Levin’s directorial debut, the documentary CAPTURED (2008), screened worldwide to critical acclaim and became an instant New York cult classic.

Michael Forstein is a director and producer from Minneapolis, Minnesota. His films have screened at festivals throughout the country including Sundance, SXSW, AFI Fest, Indie Memphis, Denver, and Rooftop Films. In between making films he has helped show them for organizations like Tribeca Film Festival, Rooftop Films, Chicago International Film Festival, and Walker Art Center, and has taught master classes in filmmaking at the San Francisco Academy of Art, University of Texas-Arlington, and IFP Minnesota. He is a 2016 recipient of the McKnight Fellowship in Media Arts.

Giovanni P. Autran is an Emmy® Award winning filmmaker with a keen cinematographer’s eye and a natural rhythm for editing that make him a versatile storyteller for TV and film.  His recent editing work and verité style shooting can be seen on the docu-series, TIME: The Kalief Browder Story, from executive producer, Shawn “Jay Z” Carter, and the award-winning documentary feature, The Legend of Swee’ Pea, from executive producer, Carmelo Anthony. As director of photography, Giovanni has filmed the narrative features Breakup at a Wed- ding and the Periods.film, both released by Oscilloscope. His hand held work can be seen on AMC’s Game of Arms and Sebastian Silva’s Nasty Baby.

Annemarie has a Ph.D in English Literature and is a graduate instructor at the University of Minnesota. She was a producer of the award winning feature documentary,  The Legend of Swee’ Pea.