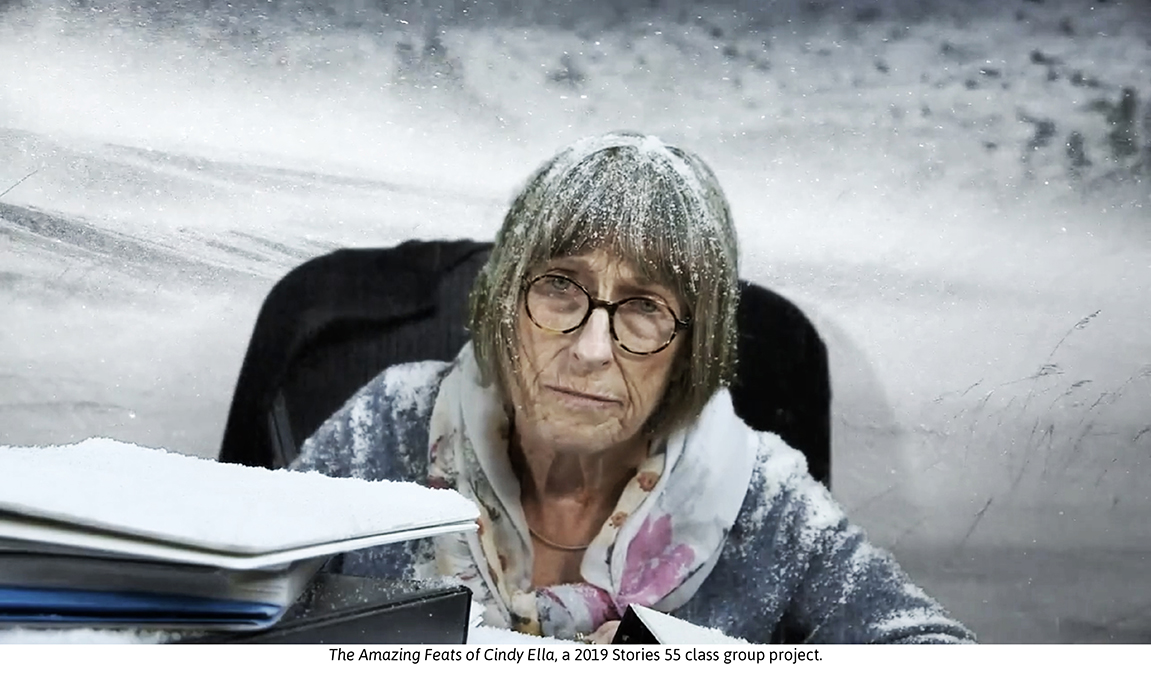 In this virtual filmmaking class open to all levels, participants will meet weekly on Zoom and explore telling visual stories in imaginative new ways in the COVID-safe space of their own homes. Students will be encouraged to harness their creativity with new approaches, working on projects individually, in small partnerships, and as a full group. No previous videomaking experience required.

Each student will use their own smartphone, tablet, or video camera and learn visual storytelling techniques and share their ideas and work. This is not a traditional filmmaking course, but rather uses creative techniques and exercises to dig into memories, personal experiences, and unusual visual story making techniques. This approach is patterned after the work of such artists as Lynda Barry and explores non-traditional ways of finding the “aliveness” of images and stories. The group will conceptualize stories with a variety of experiential techniques including writing, drawing, and video making. Ultimately, these discoveries will become a final film project to share with an audience.

The class provides a space for deep thought, reflection, and laughter to foster connections and inform our work by way of open exploration on meaningful topics including the changes in today’s world, our challenges and dreams, our wisdom and resilience, and the nature of love, hope, and curiosity. We’ll touch on the real and the imagined, our memories, our questions, our humor, our demons, and more to ultimately share something wonderful with one another, family, and friends. Sharing of projects on our Stories 55 Vimeo channel will be encouraged as well.

Join us for this exciting virtual adventure!

As a child, Barbara Wiener (teaching artist) first wanted to be an astronaut but discovered that motion sickness would be a hindrance to successful completion of the training. Instead, she found herself drawn to telling the stories of the world around her. Barbara believes human beings are hardwired as a species to respond to stories and images in emotional ways. That means our modern media has significant influence to shape how we see ourselves and others. She believes sharing visual stories has the power to create the world we want to live in. That’s where making films comes in.

Barbara’s career in film and television and teaching has spanned 31 years. She was a senior and executive producer for 14 years at Twin Cities Public Television and has completed many independent feature documentaries since that time. Her arts and cultural documentary and performance work has received many awards including six Midwest Emmys and a Ciné Golden Eagle for her documentary film, Ida’s Story. Her work been seen in broadcast and screenings around the world, including the Walker Art Center’s Women with Vision, the New York International Film Festival, Chicago Silver Screen Film Festival, Women in the Director’s Chair, Denver Film Festival, and the Sundance Film Festival, which featured a piece called Curious George Goes to Hell made with storyteller Kevin Kling.

In 2000 Barbara founded TVbyGIRLS, a nonprofit that collaborates with and mentors teen girls using the tools of filmmaking to develop critical thinking, leadership, and social change film work. Films made by collaborations with girls have been seen by audiences around the world and been awarded with four Telly Awards and a nomination for a student Emmy award. TVbyGIRLS is presently working on developing a compassion-building program with films for use by teachers, parents, and youth leadership groups, using new VR technology.

Barbara also teaches college students to think about films and our society at North Hennepin Community College and does work with AJ+, Zinc Video, and Pear Video in Shanghai, China. She is currently working on a short film about a Keiseki restaurant in Minneapolis, a series of portraits of visual artists for Inclusivi-tee, and a film on a family’s journey through their dad’s transgender process.

Leah Gross (teaching assistant) is a screenwriter and visual artist from Minneapolis. She holds a BFA in Dramatic Writing from New York University, where she received the Television Writing Award at Fusion Film Festival for her comedy pilot Nick and Nikki. In addition to developing her own work, Leah has worked in film and TV development for such companies as HBO and Lionsgate. Most recently, she entered the Agent Trainee program at United Talent Agency. Leah is passionate about helping people from all backgrounds access their innate creativity and ingenuity.