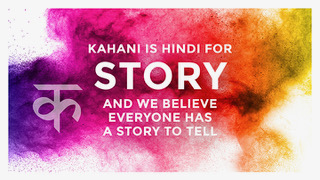 Kahani is a video storytelling platform that allows clients to collect authentic user-generated content from their loyal customers and audiences through directed, customized questions.

Video platforms exist, but they are focused on testimonies and transactional reviews. They are not integrated, they are not invitational, and they leave the customer wondering what to say. User-generated content – and video in particular – are key to attracting new audiences and connecting with existing ones. People trust people.

Kahani will enable you to capture those stories in a branded experience that guides visitors through directed prompts, making the process simple and easy – and fun.
Case Study – TedX
TEDx in two major cities – the cities where our founders live – has used our story capture platform to engage audiences in-person during their events. We curated questions based on the TEDx themes, and asked the audiences to share their own stories in two minutes or less. We branded the content, and created a sizzle reel for each program.
How This Started and How We’ve Grown
In 2016, we were dismayed by the results of the Presidential election. We got to talking, full of anger and vigor and determination. Maribeth’s lens of film as an agent for change combined with Nina’s understanding of community building led us to launch The Whole Truth Booth, a mobile app that collected stories to connect people across party lines, and that could help break down echo chambers and political silos. We tested it at the inauguration and Women’s March and built a functional prototype.
From WTB, we learned a lot. Companies want to hear from their customers, but they want a branded experience. Everyone had a story to tell, and they want a platform to share their ideas with an audience that would listen; selfie video diatribes weren’t cutting it.
Kahani does all of this and more. It’s web-based, easy to use, beautifully designed, and simple to implement.
Project Website: https://www.kahani.tech/
About the Founders

Kahani started as The Whole Truth Both, an idea that was born a few days after the 2016 Election in a text conversation between two long-time friends. 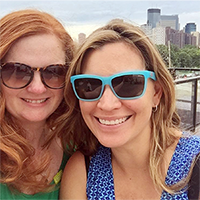 Maribeth & Nina met more than 15 years ago while both launching their careers in New York City. They’ve been there for each other through all types of ups and downs in their lives – marriages, children, divorce, international travel, illness, road trips, and many many laughs. They even ran a marathon together. When the election didn’t go how they had hoped, they leaned on each other. They wondered why the country seems so divided. Why everything feels like US vs THEM. And why we have such a hard time listening to each other.

They came up with the idea of a platform (both physical and virtual) where people living in America, from all walks of life could share their own, personal truth. Feel heard. Listen directly to others talk about their hopes, fears, dreams. The idea has evolved into Kahani, a storytelling platform for companies and causes to invite people to share user-generated video stories.

Nina Sharma has dedicated her career to working for causes that empower others. She spent 15 years working in nonprofit institutional fundraising and partnership development, at such places as the New York Public Library, Carnegie Hall, Yale University, and the Ad Council. After getting her Masters of Public Administration from the NYU Wagner School of Public Service, she worked for Dr. Jeffrey Sachs’ Millennium Villages Project, a proof-of-concept model to eradicate extreme poverty in sub-Saharan Africa. In 2004, she moved to Denver where she worked for various nonprofits, launched her own consultancy, and is now the Director of Special Projects at the University of Denver. She was one of the original founders of +Acumen, is a graduate of Impact Denver Class, serves on the Alumni Council of Hamilton College and the Alumni Advisory Council of the Denver Metro Chamber Leadership Foundation, and is a board member at Global Dental Relief.

Maribeth Romslo is a director, producer, and storyteller. Her feature film Dragonfly premiered at the Los Angeles Women’s International Film Festival and was selected for “Best of the Fest” at the 2016 Minneapolis St. Paul International Film Festival. In 2015, she produced a feature-length documentary, Our Journey Home, about how home shapes us, with celebrity narrator singer-songwriter Jewel. She was a finalist for the Sundance New Voices Lab with her project, The Last Job, an episodic story set in the 1970s about a Midwestern lady mob boss. Her girls in STEM historical fiction narrative short, Amelia, about a polio-stricken girl in 1937 who hears Amelia Earhart’s distress calls on her shortwave radio, premiered at Toronto International Film Festival Kids and took home Best Short Film at Mumbai Golden Gateway Film Festival. She recently created a short doc series about creative women in the Midwest for Reese Witherspoon’s new media company Hello Sunshine. And she is currently in production of a documentary about youth free speech with the student journalists from Marjory Stoneman Douglas High School in Parkland, Florida and free speech advocate Mary Beth Tinker. A Loyola University Chicago graduate, Maribeth spent her early career as an award-winning professional photographer and magazine editor before transitioning to film. She lives in Minneapolis with her husband and two children. You can find much of her new work at www.maribethromslo.com.