FilmNorth Academy is a summer program for students (age 17-24) currently studying film or interested in a career in film. The Academy provides a “film school” experience that combines film studies and film analysis with film production and post-production. A series of guest artists will offer insight into different aspects of narrative filmmaking as the students work through developing, scripting, shooting, and editing their own short narrative films.

A public screening of the final films will be held at FilmNorth on Thursday, Aug 13, 7 pm. In addition to the films created through FilmNorth Academy, the evenings program will include a panel discussion on careers in film, a Q& A with the filmmakers in attendance and a reception.

Deacon Warner is the Youth Programs Director at FilmNorth, where he teaches and directs video production through in-school residencies, an after school video production program and youth summer programming. His students’ work has been accepted into many festivals and screenings and won numerous awards. As an independent filmmaker, Deacon has produced and directed a number of short documentaries including the award winning 56, the story of his father’s post-war football fame at the University of Minnesota. He is currently completing The Co-op Wars, a documentary about the food coop movement in the Twin Cities.

Max Becker is FilmNorth’s Director of Technical & Facilities Operations, a filmmaker, and musician. He—along with fellow Minneapolis College of Art and Design graduates Kevin Russell and Joe Clark—founded Northern Outpost Media, a Minneapolis-based production company that specializes in uniquely organic music videos. The company began in 2008 and produced over 20 episodes of an online web series that focused on the local music scene by showcasing bands and musicians in a live studio environment. A year later, Northern Outpost began producing distinctive music videos that premiered on MTV, The Fuse Network, Pitchfork, Stereogum, and Paste Magazine.

This activity is made possible by the voters of Minnesota through a grant from the Minnesota State Arts Board, thanks to a legislative appropriation from the arts and cultural heritage fund. 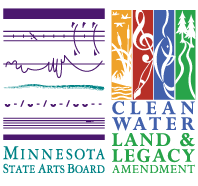