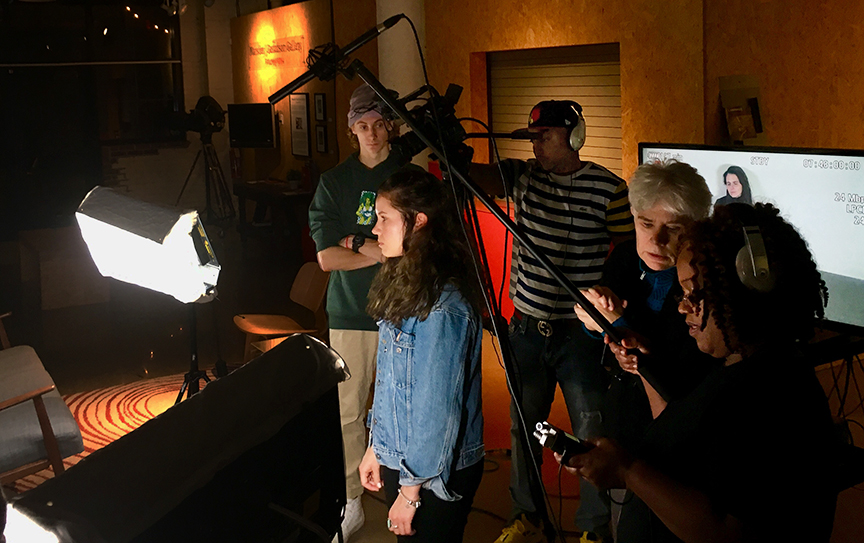 This course is designed for students with little or no previous production experience and a keen interest in developing their skills in moving image arts. In addition to providing hands-on experience through production exercises and projects, the course places considerable emphasis on visual literacy and the application of film language. This includes the basics of storytelling, cinematography, lighting techniques, directing, and audio recording. Students work together to create cinematic scenes, covering the basic crew positions and having the option of acting on-camera. Basic nonlinear editing with Adobe Premiere Pro CC is demonstrated and practiced to complete class projects. For the final four sessions bring a hard drive or 32GB USB flash drive, plus headphones or earbuds.

Pam Colby has worked in television and film for over thirty years, recently producing and directing a feature-length documentary, Not in My Lifetime, which explores the impact of marriage equality legislation on artists, activists, and politicians. The film had its world premiere at the 2018 Minneapolis St. Paul International Film Festival and was named Best of the Fest. Her credits include narrative and documentary work: Writer/Director, Freedom’s Price (1984); Writer/Director, Speak Truth to Power, A Portrait of Polly Mann (1994); Producer, The Unapologetic Life of Margaret Randall (2002); Producer, Wellstone! (2004); Producer/Director, Fertile Ashes (2011); Producer/Director, Secrets for Mom (2013); Editor/Assistant Director, Angels Alleluia (2014); Director, Carl Eller: The Hunt for Self Expression (2017). Pam’s love of storytelling led her to the Moth Storytelling Competition where her GrandSLAM-winning story was featured on National Public Radio. Pam works as a freelance producer and director, and has taught both narrative and documentary classes at FilmNorth since 2013.