Filmmaker Rolf Belgum received his Bachelor of Arts Degree in Visual Art from the University of Minnesota and his Master of Fine Arts Degree in filmmaking from The University of California at San Diego. His film DRIVER 23 is the lowest budget film ever purchased by a major network and aired on the Sundance Channel from 2001-2003. His work has been reviewed in The New York Times, Village Voice, Art In America, and Bomb magazine. Belgum was selected as one of five feature length filmmakers for the 2000 Whitney Biennial along with Errol Morris and Harmony Korine.

Belgum’s SHE UNFOLDS BY DAY won Grand Jury Prize at Cinevegas in 2008 and was described in Variety as “fluid, dreamy and beautiful.” SHE UNFOLDS BY DAY has played at festivals around the world and been translated into Spanish and Polish. The film is currently touring South America after playing in the Buenos Aires International Film Festival. Robert Kohler’s listed it as one of the best films of 2008 in World Cinema. He is currently in postproduction on his most recent film about the birth of his daughter. 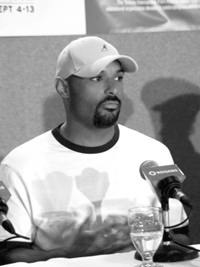 Screenwriter/Director D.A. Bullock has been a leading cinematographer, writer and director for over 15 years. He spent several years training and studying the craft of filmmaking with veteran independent craftsman in Chicago. All the while, he cultivated a dynamic eye as a storyteller. He patiently honed his directing and camera skills creating music videos, commercials and short films.

Utilizing an extensive repertoire of creative and visual styles, D.A Bullock has arrived on the media landscape as a voice to be reckoned with. Bullock’s stories represent the voiceless, those surviving on the margins of society. His keen eye for “urban expressionism” was cultivated from a dynamic breadth of influences. He has been described as “transcendent” and “unencumbered by cliché and genre limitations.”

Bullock has been a resident of Minneapolis since 2010, where he founded Bully Creative Shop. His most recent project, VANISHING PEARLS, the story of the black oystermen of Point a La Hache, Louisiana and their trials and tribulations after the BP oil disaster is in current limited theatrical distribution through AFFRM Releasing.

Producer/Director Melissa Butts is internationally recognized as a leading authority and creator of films for release in science museums. She is also the founder and chief executive officer of Minneapolis-based Melrae Pictures.

Melissa began her career with the award-winning PBS series, Newton’s Apple, and continued building an impressive body of work as a multi-genre producer in documentaries, narrative film and television broadcasts. As an Executive Producer at Twist Films her interest in 3D began while making an HD documentary, FUTURE FRONTIERS: MARS, which followed the NASA mission in its attempt to find evidence of life on Mars. Twin spacecraft carried 3D cameras, and the idea of using real-life 3D data to bring the audience closer to science emerged, as did a new version of the film, MARS 3D. FUTURE FRONTIERS: MARS received an Honorable Mention Award for “Best Short” in the 2004 AFI Silverdoc’s festival.

Following the success of MARS 3D, Melissa founded Melrae Pictures in 2005 and released 3D SUN (2007 – 2009) in cooperation with NASA and the Smithsonian’s National Air & Space Museum in IMAX 3D. SPACE JUNK 3D, narrated by Academy Award Nominee Tom Wilkinson, premiered in 2012 and captured the Grand Prix Award at Dimension 3 in Paris and is currently in distribution in museums globally. Melissa’s latest film, ELECTRPOLIS (2014), is a National Geographic Cinema Ventures project. She is in development on her next theatrical film, BIOLUMINESCENCE (working title) 2016.

Melissa Butts holds a BA in Broadcasting and Film from the University of Iowa, Iowa City, Iowa and resides in Minneapolis, Minnesota.

2014 Selection Panel
David Brind (Los Angeles, California) is a screenwriter and filmmaker whose work has screened in festivals including Sundance, Tribeca, Hamptons, Outfest and the London Film Festival. David wrote and co-produced the critically acclaimed feature film DARE, an official selection and Grand Jury Prize Nominee of the 2009 Sundance Film Festival. DARE stars Emmy Rossum, Rooney Mara, Zach Gilford, Ana Gasteyer and Alan Cumming, and is currently airing on Showtime and streaming on Netflix. David is a longtime collaborator of comedienne/actress/performer Sandra Bernhard and directed her hit Off-Broadway show Everything Bad and Beautiful. A graduate of Yale (BA) and Columbia (MFA) Universities, David is currently an adjunct professor in the Writing for Screen and Television Division of USC’s School of Cinematic Arts.

Claudette Godfrey (Austin, Texas) is the Short Film Programmer and Operations Manager for the South by Southwest (SXSW) Film Conference and Festival in Austin, Texas. She curates 11 short film programs for the festival each year, oversees film submissions, and manages the organizational “big picture” for the event. A University of Texas Film graduate, Godfrey has worked as Corporate Relations Coordinator at the CineVegas Film Festival and as Shorts Programmer for the Alamo Drafthouse’s Fantastic Fest.

Alexandra Hannibal (New York City) is the Documentary Programming Coordinator for the Tribeca Film Institute (TFI). Alexandra received her undergraduate degree from New York University and worked for Lincoln Center before pursuing a career in documentary film. She is a recent graduate of the Media Studies/Documentary Master’s Program at the New School for Public Engagement. Prior to joining TFI she worked with Apograph Productions as part of their producing team.